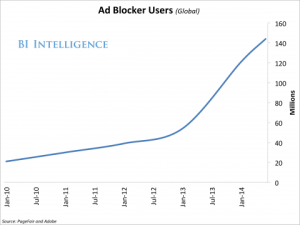 Ad blocking is big news at the moment. According to Business Insider 5% of the total online population employs one and usage grew by 69% YoY in Q2 2014 to 144 million people.

A report in the FT a couple of days ago suggested that European mobile operators are thinking of deploying software by an Israeli startup called Shine to block mobile ads at a network level. This is supposed to save precious bandwidth and stop consumers effectively paying to see ads through their data plans although most doubt this noble excuse.

The biggest adbocker currently in use is called AdBlock Plus. This is used by 2% of the global internet population. The best thing about Adblock plus is that they charge the likes of Google and Microsoft to let their ads slip through. Great news; I’m glad we elected these guys to keep us safe from the ads that no one is supposed to have an opportunity to see anyway.

Publishers are understandably worried by all the noise, ads are the lifeblood of many.

Much of it is just noise though. Content creators, curators and owners hold enough of the cards. Surely people access the web in its various forms for the content in the first place?

Thinking about it for 2 seconds:

2) Blocking at a network level will never seriously happen. There may be an opt in but who is going to sign up to a mobile network where they cannot view all of the content they want because of a pre installed ad blocker?

There is some good to come of it all though. Marketing purists will welcome the debate as a chance to move away from the banner dominated mindset; everyone agrees this is not the format of the mobile world.

I have been learning digital media since 2000. All thoughts are my own and have nothing to do with my company.
View all posts by alan king →
This entry was posted in Digital Media, Mobile, thoughts and tagged ad blocking, audience planning, banner ads, digital media, Google, mobile, online media. Bookmark the permalink.